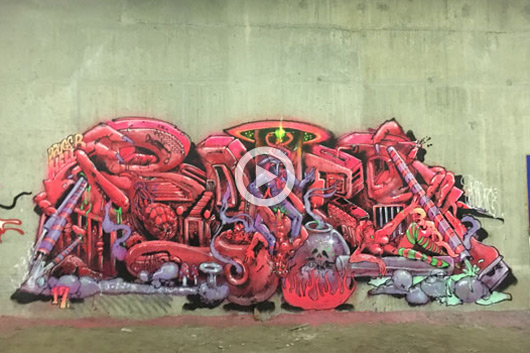 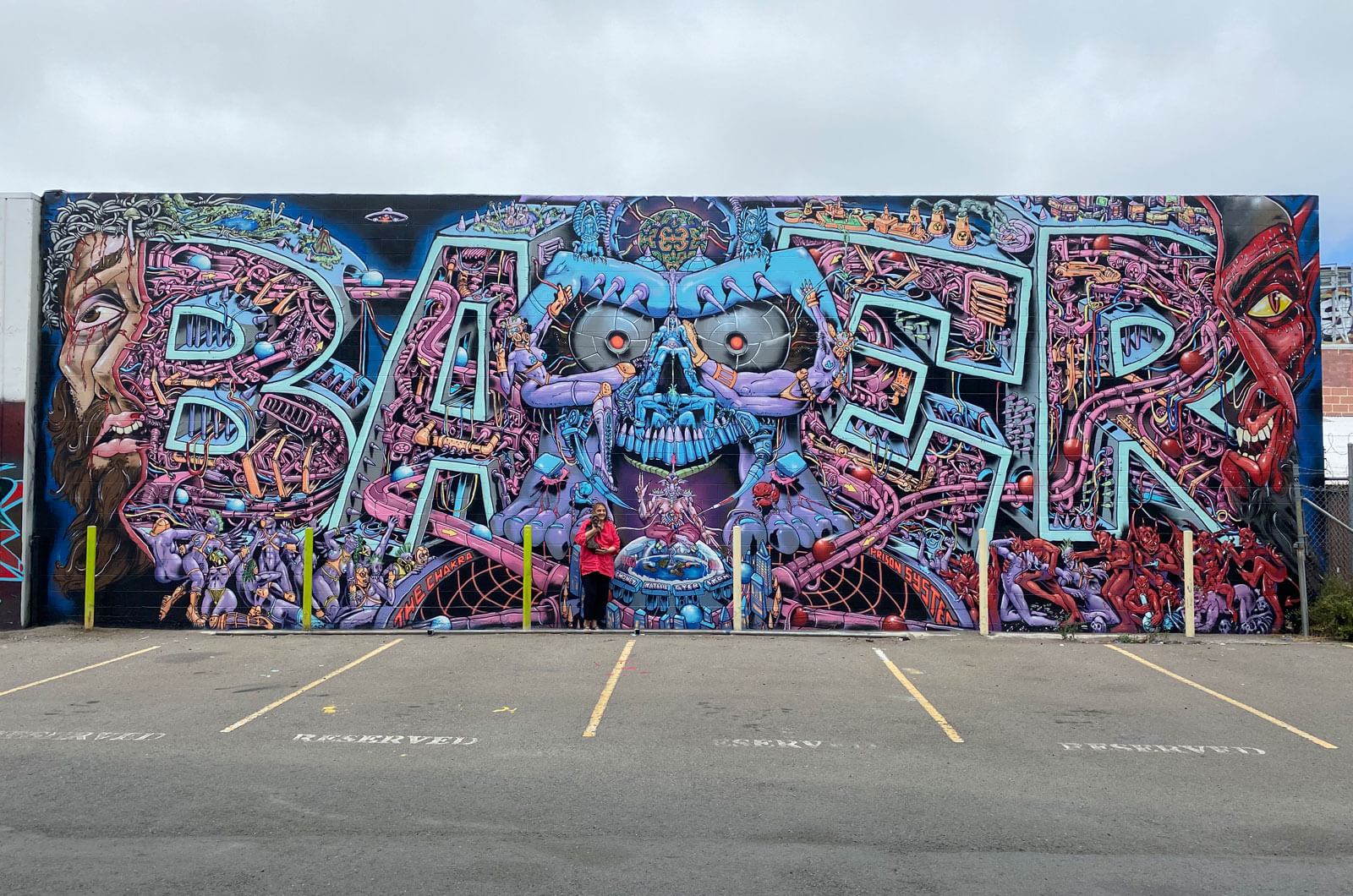 If you’ve never had the chance to see Baer BTR’s work, now’s your chance. The multi-faceted writer who defines himself as Graffomet, Porno-Graffer, Professional Pineal Punisher, Metaphysical Mutilator and The Chakra Chopper is definitely one of the most intriguing characters out there in the game. Active now for a long time, he’s developed an ultra-charged style, a mixture of classic American graffiti, illustration, gore aesthetics and 70’s psychedelic comic books like the ones from the Metal Hurlant French school.
His large-scale murals leave us speechless but, don’t get us wrong; he’s not the typical muralist and his bombing activity is there to prove it. If you check his Instagram account, you’ll find a complex world based on graffiti, but that goes much further, grows much bigger. Discover the mixture of arrogance and humor that makes up his character in this interview which features a selection of some of his Toy Story video series.

How did you get to develop such an atypical style on the U.S. West Coast, where local aesthetics and graffiti codes are so stiff? Can you tell us a bit about your personal trajectory in the game?
For an anti institutional art form, graffiti sure has a lot of rules. I have no interest in conforming to norms within my creative practice. I have always been deeply influenced by the villainous west coast graff styles by crews like MSK, AWR, LTS and KOG which has led to me elaborating on the detailed aesthetic of West Coast graffiti. I would rather pave my own path, and not reproduce what has already come before me. I use bombing as a tool for personal exploration, shedding light on dark facets within myself. 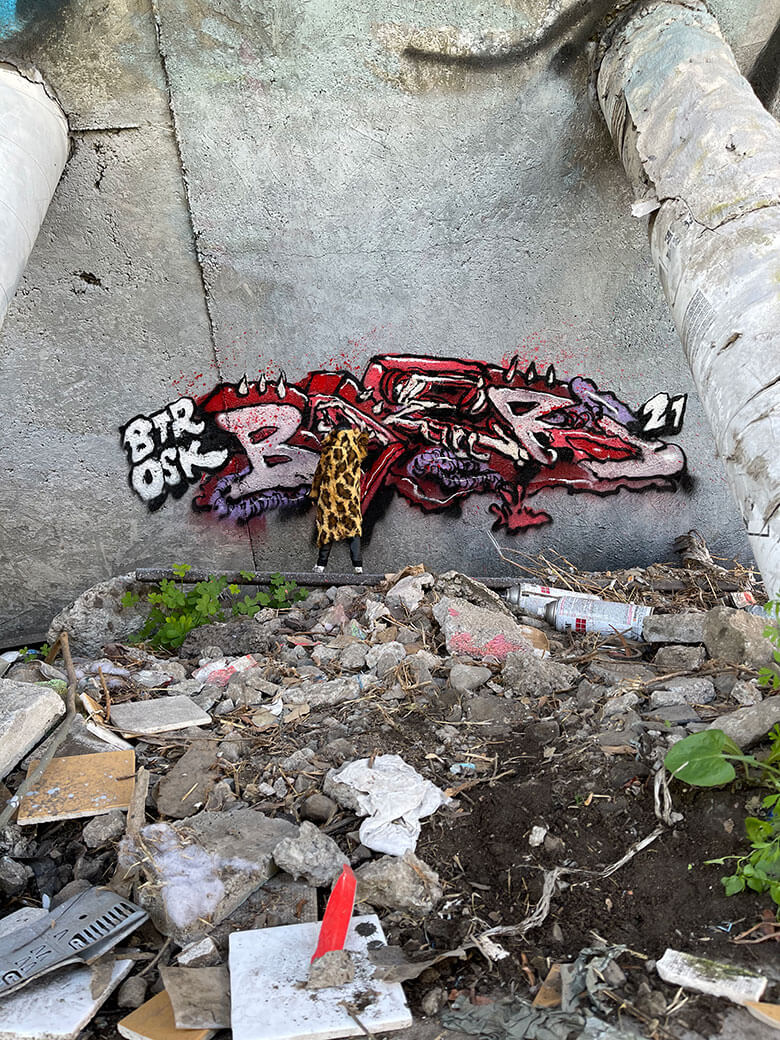 ‘I hate beef. I’m a veggie head, I keep it non GMO and plant based. However, I have to get my intake of protein somehow and toys makes for an excellent source of nutrition.’

What and who are your main influences?
DMT and ayahuasca.

During 2020 you started publishing a variety of crazy videos on your Instagram account that mix graffiti with a lot of extreme content, ranging from gore, horror movies, famous serial killers, sex, fetichism, drugs, etc. This had never been seen before in the game and that put a lot of attention on you. How did this idea come to you?
I’ve been writing the word Baer for more than 15 years, prior to 2020 I’d never had any form of social media or posted pictures online. Last year, I began using the video medium for the first time. It seemed fitting to create an entire word for the Baer graffiti to interact with and navigate through. This led to me creating short films that document my graffiti actions and illegal performance art. I felt It would be interesting to share them publicly and created an Instagram account. I’ve always had a morbid fascination with the criminally insane. It seemed like creating a reality TV version of my graffiti exploits was the next evolutionary step in my creative expression. 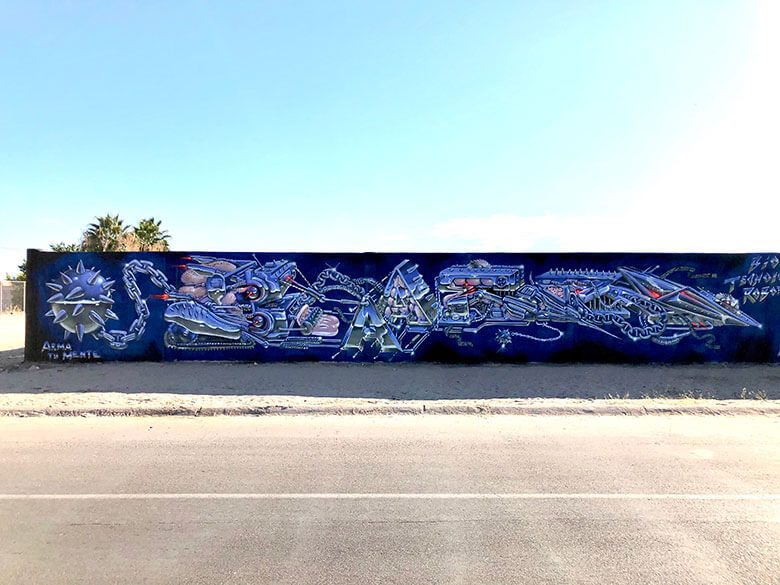 How do you approach your work? Do you see it as pure graffiti or a more complex elaborated production?
In the 70’s, NYC graff god Blade created the term “Grand Design” which he used to describe his most elaborate pieces, something beyond a burner. My style attempts to uphold the grand design lineage, simultaneously progressing my individualism, using metaphor and allegory to create graffiti that communicates a narrative. My style is a reflection of many aspects of my personality.  99% of my art is created illegally without permission, the grand designs I create are graffiti vandalism with an emphasis on detail.

Going hard on people you don’t like, as much on the street as on the Internet, is something that seems common in your life. Do you like to create beef? Or is it a natural reaction?
I hate beef. I’m a veggie head, I keep it non GMO and plant based. However, I have to get my intake of protein somehow and toys makes for an excellent source of nutrition. 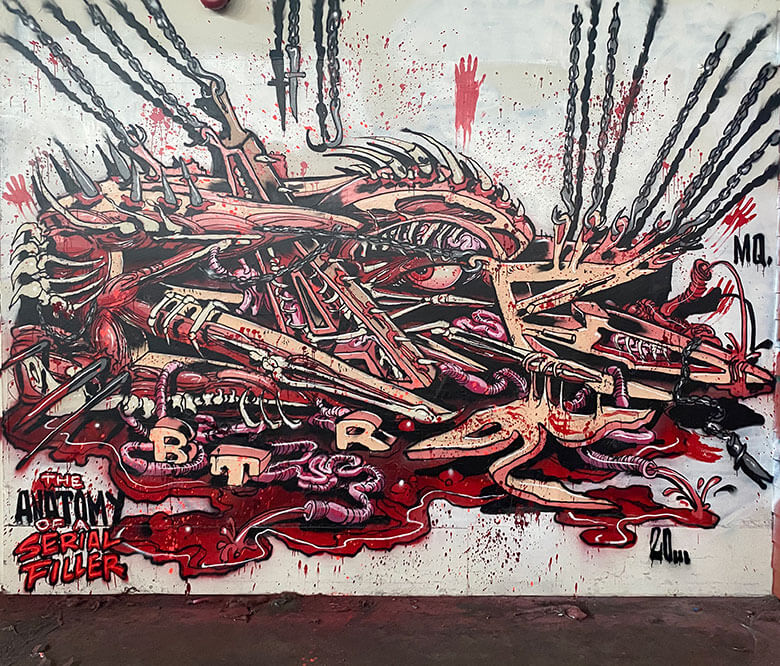 ‘My style is a reflection of many aspects of my personality.  99% of my art is created illegally without permission, the grand designs I create are graffiti vandalism with an emphasis on detail.’

Who is The Butcher aka Serial Filler, and what role does he play in the streets?
The Butcher is the physical manifestation of my darkness. He only ascends from my minds depths when the moon is full. He targets predominantly toys, leaving cryptic spray painted “messages” on walls throughout the Bay Area.

A few months back, before Good Guy Boris did a similar project, you started to produce a limited series of Serial Filler Dolls which are a hundred percent handmade; from the figurine to its clothes, tools and the packaging itself. Did you think at this project as simple craft or more as conceptual artwork?
It was an interactive art performance. I collected action figures and made custom toys as a kid, so a Butcher doll was inevitable. I held a “Be the Butcher” costume contest and some of the 13 dolls became the prizes for the winners. It was a creative art exchange, overshooting the capitalist mentality. As I was making the dolls, I interwove real life beefs into the accessories and story line of the toy. It made sense that the toy would have its own beefs lol.  Because I was making the dolls myself, rather than outsourcing the production to other artists, I was able to respond to my competitors in real time. This opened up a dialogue with other graffiti action figures that existed as performance art with the doll acting as the main protagonist. 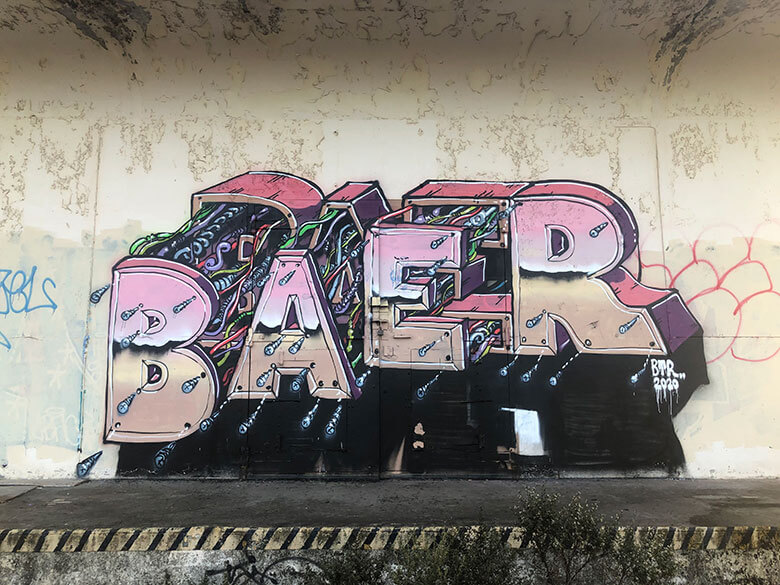 Can you tell us about those hilarious videos you created out of these figurines?
There’s nothing funny about the damn dolls! I got carried away and put a black magic curse on the toys with my own blood and they became possessed by this demonic entity called “Graffomet.” I didn’t expect the spell to work. Luckily, I shipped off 12 of the little bastards to unsuspecting victims before the dolls had the chance to break out of their packages and kill me. Foolishly, I kept one doll for myself and he’s been terrorizing me ever since. The Lil Butcher wears the pants in the relationship, I have a difficult time parenting him and he is a fairly troubled doll.
However, he is definitely the first actual plastic toy to ever do graffiti on the streets and I very proud of him for his accomplishment. When I saw him do his first little fill-in with the miniature cans he racked, I knew it was a big moment for the subculture. I decided I should document his behavior with a series of videos so people could see the kind of abuse he puts me through on a day-to-day basis.

How To Do Swipes Breaking Dance Tutorial with B-Boy Lego | Break Advice: The Fundamentals

By admin 4 days ago

B-Boy Lego breaks down Swipes - a basic powermove! Let us know how you get on down in the comments below! ▻ Click to Subscribe to BC One: ... source

By admin 2 weeks ago

Red Bull BC One 2015 The Soundtrack | Bboy Breakdance Music

By admin 3 weeks ago

MENTAL HEALTH: FROM THE KITCHEN TO THE CANVAS WITH ‘WRESTLING DEMONS’

By admin 2 days ago

What do artists, chefs and bartenders have in common? Long hours, pressure to create and tendencies towards excess are some of the links that Alex Fatho discovered in his “Wrestling...

‘PIONEER’ by INNERFIELDS for Out in the Open 2021, Aalborg

Boom! Out in the Open 2021 has just kicked off with the 7th season of new beautiful murals, where Innerfields have just finished the first one to come in the summer...

THE IMAGINARIUM OF: CAVER

Name: Caver Crew: NCB GVS R1 RUA. City-country: From Lisbon, but living in Porto, Portugal. Active since: 1998 Personal motivation: Passion for the game. The Caver produced the illustration for...

“Writing the Future: Basquiat and the Hip-Hop Generation” Continues at Museum of Fine Arts, Boston

By admin 2 weeks ago

Featuring dozens of works in a range of media by the late legendary Jean-Michel Basquiat, along with artworks by several of his key contemporaries, “Writing the Future: Basquiat and the...